Sydney Louise Hanick is an alum of Fork and Will BYOB, and currently a sous chef at Kensington Quarters. Well before she started cooking in professional kitchens, she studied American – specifically Mid-Atlantic – history at the University of Delaware. It’d be tough to find a Philly chef better qualified to cook our upcoming dinner at the historic Powel House.

“The Powel House is of that revolutionary/post-revolutionary era that I’ve always found fascinating,” Hanick says. She designed a menu inspired by the culinary trends and available ingredients of the period, including dishes like pork rillettes and Pennsylvania fish chowder (more on that later), which will be served family-style.

Eased by the passing of platters, conversation will center on the benefiting organization of the night: Philadelphia Society for the Preservation of Landmarks (PhilaLandmarks). They’re the stewards of historical sites like the Powel House, which was the home of Philadelphia’s first post-independence mayor and is now open to the public as a space to host weddings, meetings, and dinners like ours.

Guests will dine where some of our country’s founders did decades ago – a novelty Hanick’s pretty excited about. “If we can get 20 people in a room talking about the history of Philadelphia,” she says, “I think that’s a beautiful thing.”

It’s the second time she’ll see SSSC-inspired chatter swell around the table; she also prepared the meal for our benefit dinner at The Monkey and the Elephant (a non-profit café that supports foster youth) that we held last December.

“That was really amazing to be a part of,” Hanick says. “The young adults have this sense of empowerment because they’re learning marketable skills.”

To Hanick, cooking for SSSC is heartening and presents an opportunity for professional development. She turns out five to six courses in sparsely equipped kitchens (no open flames allowed in historic landmark buildings!) and rather than executing the vision of a head chef at a restaurant, she designs her own plan for the meal with original recipes.

“Every supper club I do, it’s my own menu,” she says. “There’s a huge sense of pride that comes with that.”

We’re proud to have her back. 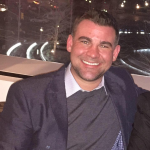